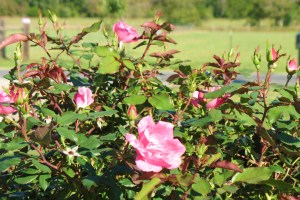 I have lived my entire life in semi-rural Arkansas — unincorporated areas within a twenty-minute drive from Little Rock. So, country — but not too far from the city. I rode a yellow bus to the town of Bryant, Arkansas, where I attended all twelve years of school (there wasn’t a kindergarten program for me). I spent more than an hour a day on the bus, and I rather envied the “town kids,” who could walk to school or meet up at the local diner or even go home for lunch. We drove to the grocery story, to church, to work — there were no businesses within walking distance of our house. It was always my plan to live in a city someday — and then I married a deeply-Arkansas-rooted guy who wanted to live in the country. More than twenty years ago, we built a house on ten acres, seven miles from the nearest grocery store, church or other business, and our children rode yellow buses to their schools. I’m still within a twenty minute drive of Little Rock, though now I’m north of the capital city, some forty minutes from my childhood home. With plenty of room for the kids to play outside, almost no crime to worry about, lots of privacy, it’s been a good place to live and raise our now-grown family … but I have to admit, I’ve always wondered what it would be like to live in a different setting.

I’ve had a chance to travel quite a bit within the U.S., visiting 33 states so far, and part of the fun of travel for me is to imagine what it would be like to live in each place I visit. What would life be like in Arizona — flat land, few trees, gorges and canyons and deserts rather than the wooded, grassy hills of central Arkansas? Or in New York, with its high-rise buildings and ever-flowing rivers of yellow cabs, its noise and bustle and urgency? Arkansas sees little snow in winter; how would I like shoveling walkways in Minnesota, bundling up against frostbite, skating on lakes frozen solid until spring? I’ve always wondered if my pleasant, but less-than-adventurous childhood helped fuel my writer’s imagination by making me envision those life differences rather than experience them.

In pursuit of their career training, our daughters have moved to urban areas far from home — one in central Massachusetts, the other in Seattle. They both plan to move closer to home eventually, but for now they are where they need to be. As much as I miss them, I’m pleased that they have the chance to explore different parts of the country, different ways of life. 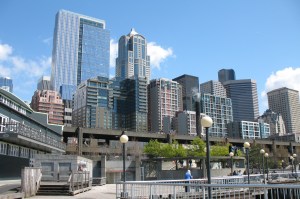 Since our oldest daughter’s stroke in October, 2010, I’ve spent approximately six months staying with her in Seattle, helping in her recuperation so she could continue her post-doctoral training. I’ve just returned from another two-month stay. As much as I regret the reason for my visits — I would give anything if I could have prevented the difficulties she has faced for the past seventeen months — I’ve still found much to enjoy about my stays with her. It’s such a change of pace there. Living in a third (and top) floor apartment with an elevator and a tiny balcony from which one can catch occasional glimpses of Mt. Rainier. Hearing footsteps in the hallway outside the door. The constant rumble of traffic from nearby I-5. Spending 40 minutes on an articulated metro bus for a 4-mile commute. Walking rather than driving to a nearby grocery store, mall, doctor’s office, restaurants. Being surrounded by glacier-topped mountains and so much water — Puget Sound, Lake Washington, Lake Union. Boats, bicycles and buses as commonly used for transportation as cars and pick-up trucks back home. Not better, but different. I enjoy those differences. I love meeting the people who have grown up there, and finding out that other than geography, we aren’t really all that different, after all.

So, I’m back at home on a pretty day in central Arkansas, looking through a glass door at a coral bell azalea in full, glorious bloom, hearing birds outside rather than traffic, the muted drone of C-130s from the nearby air base rather than the noisy clatter of city buses. I’m sitting in my recliner, working on a book set in southeast Texas, imagining what it must be like to live on the banks of a big lake there. And it’s a nice place to be.

Wherever you are, whatever the view from your window, I hope you’re having a lovely day.

HUSBAND FOR A WEEKEND, available in stores now from Harlequin Special Edition and Gina Wilkins!

And don’t forget to “like” my facebook page for more frequent updates and to join the conversation there! 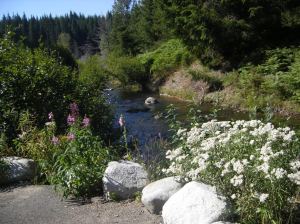 I’ll be in Seattle with my daughter for another few days, and while summer seems to have already settled in back home in Arkansas with highs in the 80s, spring is just coming to the Pacific Northwest. The highs here have been in the 40s and 50s, still a little cool, but warming. I’ve seen a lot of rain during the past few weeks, of course, but also some absolutely beautiful blue skies above the surrounding snow-capped Cascade and Olympic mountains. The cherry trees are starting to bloom, along with daffodils, early rhododendrons, other flowers, bushes and flowering trees I don’t even know names for. And everywhere I look, towering evergreens remind me why Seattle is called the Emerald City. Just beautiful.

While I’ve been with her, my daughter has helped me update my site here a bit. I have a new front page with covers from current books, links for FAQ and a sign-up for email updates of upcoming releases, and links to all my past books that are now available for Kindle and/or Nook. Within the next few days, my first fifteen published books will be re-released as Kindle exclusives (some are already available there — links are provided on the Books page). And my paranormal suspense novel, WAKE ME, will be released very soon. HUSBAND FOR A WEEKEND, my newest Harlequin Special Edition, is available in stores and for ereaders now. It’s a very exciting time for me, and it was definitely time for an update here! Thanks, Courtney.

Join me on my Facebook page (link provided at right) for more frequent updates and conversations. I love hearing from fellow book lovers!