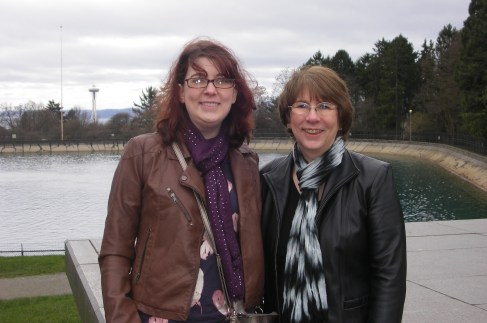 I haven’t disappeared, though it might seem as though I have from my lack of posts lately. I’ve spent the past month in Seattle with my older daughter – the one who had a stroke in October, 2010. I came here because after her return from visiting home at Christmas, she began to have serious health struggles again – to the point that we were all getting very worried about her ability to continue working and living on her own. While my husband stayed home to take care of things there, I joined our daughter for a series of doctor visits to try to find out why she was struggling so hard against overwhelming fatigue and accompanying depression. Post-stroke fatigue is a serious issue, but hers had gotten suddenly debilitating.

Her amazing primary care physician, rehab physician and therapists worked together to adjust medications and daily activity plans. Not only is Courtney’s energy level now under much better control, she has made such amazing leaps in recovery during the past month that she has brought her therapists, friends – and even landlady! – to tears of joy. For the past 16 months, Courtney has been primarily confined to a wheelchair, her walking unsteady even with a walker or arm crutches (she has suffered from ataxia, or uncoordinated movements following her brainstem stroke). She was frustrated that she couldn’t seem to go beyond 150 feet, no matter how hard she worked – and she works Very hard. One evening soon after I arrived here, I was having trouble with a computer issue (quite common for me) and Courtney got up and walked across the room to help me, without even thinking about what she was doing. I nearly fell over in surprise. She had walked beautifully, without crutches, with little evidence of ataxia! Two days later, her stunned physical therapist — and all the other therapists who have been monitoring her for all this time — watched as Courtney walked for 15 minutes on a treadmill without even holding onto anything, the first time she’d been able to walk on the treadmill. She has been walking more every day since, including a several-block walk from her apartment to a fast food restaurant, a huge accomplishment! That was an exhausting exercise and by the time we got back to her apartment, she was worn out, struggling to pull one leg in front of the other, but determined to make it the entire way without resorting to her wheelchair. I’ve seen this determination in her from the beginning – through a previous life-threatening injury 10 years ago, through earning her doctorate degree and accepting a job 2400 miles from her home, and now after this major stroke. We are so proud of her!

I’ll stay here for a couple more weeks to help her with some more walking (her therapists still aren’t ready to clear her for walking outside on her own). After 16 months in a wheelchair, she continued to keep up her core exercises and strength training, but now she needs to rebuild endurance in walking. She still has little use of her right hand, no pain or temperature sensation on her left side, and bouts of vertigo, but there is little doubt that she’ll soon be able to park that wheelchair most of the time, which is more than many people expected at this point! We thank everyone for the many prayers that have been and continue to be offered on her behalf.

While my daughter works at her career in medical research, I’ve been writing, of course. My next Harlequin Special Edition, HUSBAND FOR A WEEKEND, will be available in April — this is my 100th project for Harlequin, and I couldn’t be more delighted to have been with them for so long! See the Books Available Now page for more details.