Every year since she was about 12 (which would be a total of 13 years), my middle child, Kerry, and I have braved the weather and the crowds to shop on Black Friday. We’ve stood outside in cold rain at 4 a.m., tried on shoes at 5, jostled our way through a crowded mall at 6. For some strange reason, we both think it’s fun. Though we usually have a list of a few things we hope to score, we deliberately never have anything we desperately want to buy, so we’re not terribly disappointed when we miss out on the big sale items. Perhaps that’s why we are able to enjoy the experience. We get a lot of shopping done, find a few bargains, and top it all off with lunch at a nice restaurant. She starts her medical residency next year, so it may be that we’ll have to skip a few Black Fridays in the future, but I’ll always treasure the memories of the ones we’ve shared — our special day each year.

During all of our years of shopping on Black Friday, we’ve had bad experiences with rude shoppers only a few times. People who selfishly break in line, or push and shove, or curse or act belligerently. Most of the people of every age, ethnicity and status with whom we have waited in line have been friendly, polite, laughing at themselves for being out so early and braving the elements to save a few dollars or, like Kerry and me, because it’s a family tradition. We’ve laughed with them, swapped stories, compared holiday notes, even exchanged recipes (I once got a really good hot cider recipe from a lady in line behind me — I’ll have to post it on my easy recipes page). I’ve seen shoppers hold doors for the elderly and handicapped even if it meant losing a position in line, themselves. I’ve been waved ahead of someone in line to check out because I had only an item or two and the other shopper had a cartful. I’ve seen someone pick up a dropped ten dollar bill and run to catch the person who’d lost it. Part of the fun for Kerry and me is to people watch and share the Christmas shopping experience with others.

And then I hear stories about a Walmart employee who died in a shoppers’ stampede in New York. About people getting into fist fights and pulling weapons at other shopping sites. And it makes me so sad that there are those who would turn what should be a fun experience into an ugly, tragic media event. I think of the children who witness that inexcusable behavior, who are being taught that greed and selfishness and violence are acceptable traits, who see the holidays only as a time for acquisition and flaunting of material possessions, and I am sickened. That’s not the world I want to live in, not the one I’ve raised my children to perpetuate.

When I hear about those things, I remind myself of all the nice people I’ve met, the uplifting things I’ve seen, and I honestly believe that most people are decent and caring. That sometimes otherwise nice enough people get caught up in mob mentality and behave in ways they wouldn’t, ordinarily. And then there are those who just ruin everything good.

I don’t know the solution to Black Friday violence (while I know the name is a financial allusion, it sounds bad in itself, doesn’t it?). Maybe the stores should stop offering those few, highly coveted, extreme markdowns that are available in such limited supplies that some shoppers feel compelled to fight for them. I certainly understand the reasoning behind that bait, having worked in advertising and retail in the past — but perhaps store-wide discounts would be as effective as a couple of hysteria-building bargains. Again, it’s giving up on something because of the “bad apples,” as we seem to be doing more and more these days, but maybe it’s the only answer.

I admit it, I want to live in Norman Rockwell’s world. I was blessed by being raised by parents who had little money but a wealth of values they passed on to their four children. We didn’t have a lot of material possessions, but we were taught that other things were much more important — like being together, sharing holiday memories, respecting and appreciating other people. John and I have tried to raise our children the same way, valuing integrity, character and education over money and “things,” staying out of the “name brand” game, learning to budget and save and appreciate the things they have rather than always trying to acquire more. We’ve told them repeatedly that there is no “thing” worth fighting for or giving up their personal integrity to possess.

Like everyone else, I like nice things. I recently posted about the modern conveniences I enjoy, like microwave ovens and digital cameras and a good computer. There are always a few items I wouldn’t mind having but just can’t justify (such as a big screen HDTV when I have a perfectly good 27″ Sony Trinitron that isn’t really all that old. When it wears out, I’ll upgrade). But, you know? There is no gift I could receive, nothing I could buy, that would be more valuable to me than the memories of shopping and lunching with Kerry on all those Black Fridays. Or attending football games with Courtney. Or playing video games with David. Or going with the whole family to Branson, or to the fair, or to science museums, or to the beach or the mountains (we’ve taken modest vacations, too, but we’ve always had fun together). I’ve known people who have broken ties with their families and friends because of fights over money and things, and no matter how wealthy or trendy or famous they are, I pity them. At the end of my life, I hope to be surrounded by loved ones — as my mother was — rather than a roomful of “things” purchased solely to impress those who think real treasure can be measured in dollar signs. 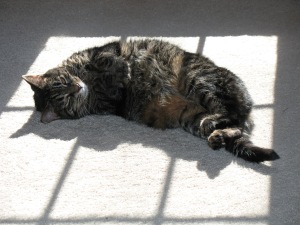 Apparently, sleep deprivation has made me melancholy and preachy today. Sorry about that. To conclude on a more cheerful note, I hope all my U.S. friends are having a nice Thanksgiving weekend (sans the bad apples), and I wish peace to all my friends around the world. And a very happy birthday to my son, David. May you each find a little sunny spot of your own to enjoy sometime today.

One thought on “Black Friday memories”