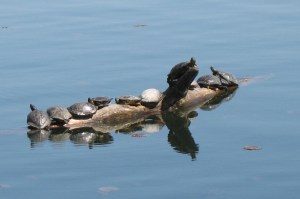 After being away just over two months helping my daughter, I returned home from Seattle on the evening of May 5, where I was greeted at the airport by my husband and son. I have to admit it was a disorienting drive home. I left in winter and returned to the heat of an early Arkansas summer (though the moderate temperatures have been absolutely perfect for the past few days). All during the drive home, I saw signs of the stormy spring I’d missed — mud lines on the foliage where flood waters had risen, huge trees uprooted by tornadoes, scraps of insulation still caught in treetops from the houses that were hit on the Little Rock Air Force Base, which is less than a mile from our home. The tornado that hit the base went directly over our rooftop, depositing debris in our yard. My husband said he heard the twister go over, but fortunately we sustained no damage. Several in the storm’s path the next time it touched down were not so fortunate. The nearby town of Vilonia was hit hard, and lives were tragically lost.

The day after I arrived home, my husband and I made the forty-minute drive to the University of Central Arkansas in Conway for our son David’s presentation of his UCA Honors College senior thesis, followed by the Honors College banquet honoring the graduating seniors. We returned to Conway again the next day for the graduation, itself. More disorientation — my youngest child is now a college graduate. He will begin medical school in the fall, and is even now beginning the search for an apartment. The nest will truly be empty.

Immediately following the graduation activities I had to get back to work, finishing and polishing a book that was due for Special Edition (more about that in the next post). Along with laundry and grocery shopping and dusting (my husband kept the house tidy and vacuumed while I was gone, but dusting is not his strong point) and other catch-up chores, I hardly had time to even look out a window. Needless to say, I feel like I’ve been running hard for the past few months!

So, after I finally delivered the book, folded the last clean towel and put away the dust cloth earlier this week, I realized to my surprise that May was already half over! Before it’s gone completely, I want to make sure you all know that May is National Stroke Awareness Month.

According to the American Stroke Association website, stroke is the number three cause of death and the number one cause of adult disability in the United States. Those of you who read this blog know that our older daughter suffered a stroke on October 30 of last year at the age of 30. Almost seven months later, she still has to use a power wheelchair for traveling more than about a hundred feet (her maximum distance with a walker at this point), and she has still not recovered the use of her right hand. She was extremely fortunate in many ways, especially in that she has no cognitive deficits, but she still has a long way to go toward full recovery. She is documenting her journey in a blog, mostly for the benefit of other young stroke survivors and their caregivers. I’ve put a link to her blog here.

Courtney had extremely low risk factors for stroke; no definitive cause has yet been determined for the clot that caused her attack. She was a healthy, slender, active nonsmoker who did not drink and had never done recreational drugs, and she seemed like the least likely candidate for an ischemic stroke. Still, it is important for everyone to be aware of the known risk factors and to minimize those risks as much as possible. Many of those risks can be modified or treated — by losing weight, quitting smoking and managing cholesterol, among other measures. Having seen what Courtney has been through, as well as all the other stroke survivors we’ve met during the past seven months, trust me, it’s worth the effort!

Courtney was at her apartment alone when she became aware that something was wrong. As a medical researcher, she knew some of the warning signs, yet even then she hesitated before calling for help, telling herself she couldn’t possibly be having a stroke. Looking in the mirror, she saw that her pupils were different sizes and one side of her face was drooping. We are all so grateful now that she took those signs seriously and called a friend immediately to take her to the hospital. Her heart rate crashed after she arrived at the emergency room. Had she still been at home alone, I don’t even want to think about what might have happened.

For Stroke Awareness Month, please familiarize yourself with the warning signs of stroke:

Sudden numbness or weakness of the face, arm or leg, especially on one side of the body.

Sudden trouble seeing in one or both eyes.

Sudden, severe headache with no known cause.

Much more information is available at http://www.strokeassociation.org. I highly recommend you check out this great site.