Three and a half years ago, John and I helped our older daughter move to Seattle by driving a UHaul truck and pulling her little Saturn on a trailer. We traveled through Oklahoma, Kansas, Colorado, Wyoming, Utah, Idaho and Oregon before arriving in Seattle — several states we’d never driven through before — and we had a great time seeing that part of the country in the early spring. A year later, we drove the UHaul for our next daughter and her husband when they moved to Massachusetts, our path taking us through Tennessee, North Carolina, Virginia, Pennsylvania, New York and Connecticut (with a side trip into Rhode Island while we were in the area). Again, we loved seeing parts of the country we had only flown over before, watching the landscape and building styles changing as we moved farther away from Arkansas, where my husband and I have both lived all our lives.

Three weeks ago, John and I flew to Seattle to spend some time with our daughter, who survived a brainstem stroke a year ago this month. Still in a wheelchair most of her days, she needed some help with some things around her apartment, wanted us to accompany her to a few appointments and we decided to drive her little car home and sell it for her. She is unable to drive currently (she hopes to do so again eventually) and owning, insuring and parking a car are expenses she doesn’t need for now. We had a very nice two-week visit with her, enjoying the refreshing Pacific Northwest coolness after a brutally hot Arkansas summer, and then we set out last Tuesday for the drive home. We chose a different path this time — through eastern Washington into northern Idaho (breathtakingly beautiful), through Montana and the northeast corner of Wyoming, through South Dakota, down the border of Iowa into Missouri and home from there (with a few hours stop in Branson, three hours north of home, because I couldn’t bear to pass that close and not at least pop into some of my favorite places there).

Having never been to Montana or South Dakota, John and I had a wonderful drive home. We explored tiny, historic Wallace, Idaho, where we spent our first night at the vintage 1960s-era Stardust Motel. After a second night in Hardin, Montana, we whiled away several hours at the Little Bighorn battlefield in Montana, soaking in the somber atmosphere and the impressive scenery and imagining the sights and sounds of that terrible battle between two conflicting cultures. The museum there is fascinating, as was the short film that presented both sides of the conflict quite comprehensively. I haven’t studied Western history extensively, so I learned quite a few facts I hadn’t known before and found intriguing both as a writer and an American. 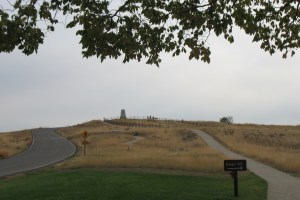 Following a three hour delay at the Wyoming/South Dakota border to replace a tire ruined when something punctured the side (we still don’t know what), we continued on to Keystone, S.D., to see Mt. Rushmore, arriving there in time to view it both in waning sunlight and then after dark with the lights on the faces. We spent that third night in Rapid City, then put in many hours of hard driving the next day to make up for the lost time with the tire, though we couldn’t resist spending a couple of hours at famous Wall Drug in Wall, S.D. (home of free ice water and nickel coffee — if you haven’t heard of it, look it up — fascinating place! I’ll spare you the photo here of us posed sitting on a six-foot tall “jackalope.”) After staying just outside Kansas City, Missouri that night, and our short stop in Branson, we were home by eight p.m. on Saturday — tired but feeling so blessed to have experienced even more of this amazingly diverse country.

It’s funny that we used to dread long car rides, seeing them only as a means of arriving at a destination when we couldn’t fly. Now that all three of our children are out on their own, John and I both love setting out to see new places, new landscapes, to chat with friendly strangers along the way, to stand at the site of events we’d learned about in long-ago history classes. We’d still like to go back to Yellowstone and the Badlands (two stops we had to pass by because of time restraints), and up into Minnesota and Michigan someday. Next fall, we’d like to drive up into New England to visit daughter number two and her husband and see the foliage (we’ve never been north of Massachusetts, so Vermont and Maine would be on that agenda).

But for now, it’s back to work on another Harlequin Special Edition. My next book, DOCTORS IN THE WEDDING, will be available in January, 2012. This will be a momentous release for me (more about that in my post next week, as well as details for the next contest).

One thought on “Back to work”