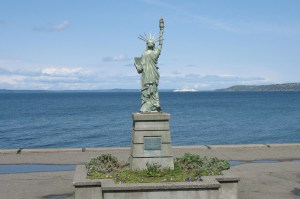 September, 2001, was a busy time in this then-bustling household. Our youngest child, then twelve-year-old David, had recently started seventh grade. Our oldest daughter, Courtney, was just beginning her post-graduate microbiology training in Little Rock and was living with us until she found an apartment closer to her graduate school, a half hour commute from here on the best traffic days. Middle child, Kerry, was ensconced in a dormitory an hour away from home for her freshman year of college. I was on deadline, as always, and my husband was busy with his woodworking and other always-ongoing projects.

The morning of September 11 was hectic. I’d gotten David up, fed him breakfast, made sure he had either a sack lunch or lunch money (I don’t remember which), and had waved to him as he’d climbed onto the school bus. Courtney rushed around the house getting ready to leave for grad school, hoping the early rush hour traffic would have eased a bit by the time she reached the Arkansas River bridge. I remember very clearly sitting in my recliner with a cup of coffee, taking a moment to breathe before starting work, watching Good Morning, America with Charles Gibson and Diane Sawyer. Jack Hanna was scheduled to appear with some of his cute animals, and I always enjoyed those segments.

Just as Courtney was gathering her backpack and keys, an announcement came on the TV that a plane had hit the World Trade Center. I was shocked, but the details were sketchy, and for all I knew it was a small plane in a tragic accident. I called my husband in to listen, and he sat in his recliner next to mine to learn the details. Courtney hesitated a moment, but she had to leave. The news went to live coverage, showing smoke billowing out of the first tower, and I divided my attention between watching that broadcast and watching through the patio door as Courtney dashed out to her car. Just as she drove away, I looked back at the screen — only to watch in horror as a plane hit the second tower. I wasn’t even sure that was what I had seen, I remember asking John if he’d seen it, too. He had — as had the stunned reporters covering the event.

My first reaction was that something must have gone wrong in a control tower. I asked John if there could be some sort of computer glitch causing the planes to be so horribly off-course.  He looked at me sadly and just shook his head. It was a naive question, of course. I simply could not fathom the kind of evil intent that would have deliberately led to those heinous actions. And then the reports came from the Pentagon. And a field in Pennsylvania. And scene after scene of unimaginable terror flashed across the television screen.

I thought of my friends in New York — my agent and her staff, my editors, other writers. I prayed they were safe. I reached for the phone and called my mother, like a frightened child needing my mother’s reassurance that everything would somehow be all right, when we both knew our world would never be quite the same. I called Courtney, needing to know she had arrived at school safely, and then Kerry, to make sure she was okay at college. I couldn’t call David at the junior high, but I had to trust he was being well cared for there. My first instinct was to reach out to the ones I loved most.

I did no writing that day, nor for the next week. It took a while before I could concentrate on light-hearted fiction again, and many of my writer friends admitted they had the same difficulty. Though I was far from the tragedy, safe in Arkansas, my heart — like the rest of the country’s — was in New York and Washington and Pennsylvania with the heroes and victims there. Our skies were empty, as were our spirits for those few bleak days, and we could think of nothing else. For a few days, we were a country united in grief and anger, our petty differences set aside.

Now, on the tenth anniversary of that day, so much has changed — in the world and in my own life. My mother lost her battle with pancreatic cancer four years ago, and there are so many days I wish I could call her again for her encouragement and reassurance. I am fortunate to still have my dad, and I know I can call on him whenever I need him. I’ve written quite a few light-hearted romances in the past ten years. I believe there is value in occasional hours of escapist entertainment, and always in the celebration of love.

I remember Courtney dashing out to her car; now she spends most of her days in a wheelchair still working to recuperate from the stroke she suffered last October. She is back to work full-time in medical research, searching for information that will lead to better treatments for hepatitis C while dealing with her own physical limitations with grace and courage 2400 miles from her family here. John and I could not be more proud of the brave and independent young woman she has become.

Kerry married a fine young man she met at the university she had just begun to attend ten years ago, completed medical school, and is now a third-year child and adult psychiatry resident in Massachusetts while her husband, Justin, attends graduate school.  Every day she works with people who struggle to survive trauma and addiction and chemical imbalances that make their lives so difficult, and I know she is making a difference there. She knows we are extremely proud of her, too.

David is now a first-year medical student, preparing to begin his own career of service to his community. At the risk of redundancy, I have to admit we’re very proud of him, too.

Our children are so fortunate to live in a country where they are free to pursue their dreams. I hope they comprehend and will always appreciate the sacrifices so many have made to keep that freedom alive.